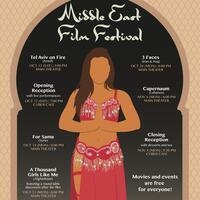 The Middle East Center and the  Askew Student Life Cinema (ASLC) are teaming up for the 11th year to recognize, present, and discuss a variety of films from across the Middle East. Palestine, Israel, Syria, Afghanistan, Iran, and Lebanon are all represented in this year’s lineup, with titles extending until November 4th. All films are free to the general public, and several are showing for the very first time in Tallahassee. Don’t miss your opportunity to see these excellent films on the big screen!

A reception will follow the opening night on October 12th at 7 PM. Be ready for some great music, delicious food, along with a dance show and entertainment performed by the FSU belly dancers. Several Middle East student organizations will have display tables showcasing their current and future projects.

Tel Aviv On Fire, 100 minutes, Sameh Zoabi, 2019 (Palestine, Israel). Thoughtful and well-acted, Tel Aviv On Fire is a comedy-drama satire film that highlights the awful absurdity of war and proves it is possible to find humor in the midst of cultural conflict. The film premiered internationally at the 75th Venice International Film Festival where Kais Nashef won the Best Actor award. It won the Best Film in the Seattle International Film Festival. Watch the trailer here.

For Sama, 100 minutes, Waad Al-Kateab and Edward Watts, 2019 (Syria). This documentary is both an intimate and epic journey into the female experience of war. A love letter from a young mother to her daughter, the film tells the story of Waad Al-Kateab’s life through five years of the uprising in Aleppo, Syria as she falls in love, gets married and gives birth to Sama, all while cataclysmic conflicts rise around her. Watch the trailer here.

A Thousand Girls Like Me, 76 minutes, Sahra Mani,  2018 (Afghanistan). A vérité documentary. Khatera, a 23 year old Afghani woman, who after being raped and impregnated repeatedly by her father, is determined to see him brought to justice. She tells her story publicly on national TV, seeking punishment for her perpetrator and shedding light on the faulty Afghan judicial system. Watch the trailer here.

The screening of this film will be followed by a round table discussion.

Three Faces, 100 minutes,  Amin Jafari, 2018  (Iran). Three actresses at different stages of their career: one from before the 1979 Islamic Revolution, one popular star of today known throughout the country, and a young girl longing to attend a drama conservatory get together in this ultimately powerful film by Jafari. Watch the trailer here.

Capernaum hits hard, but rewards with a smart, compassionate, and ultimately stirring picture of lives in the balance. Follow the story of little Zain as he sues his parents in protest of the life they have given him. before ending up on the street caring for a stranger’s baby. Winner of the Grand Jury Prize at the Cannes Film Festival. Watch the trailer here.

Following the last film, we will have refreshments and Middle Eastern dessert, music and dance.