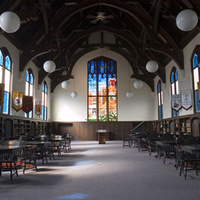 Learn what dreams were thought to be, how they carried significance and how they were interpreted in early medieval China at an annual lecture series on Buddhist studies. The FSU Department of Religion is pleased to host Robert Campany, professor of Asian studies and religious studies at Vanderbilt University, who will speak on aspects of the dreamscape. This talk will focus on the “spillover paradigm,” in which the dreamer is a self-cultivator and his or her dreams are a direct continuation of daytime cultivational pursuits, and the “diagnostic paradigm,” in which dreams are interpreted as symbols indicating the dreamer’s progress on the path toward the goal of cultivation.

I came away with some things to ponder and explore, and that is what I look for in a good lecture. However, I wish this University had better signage! Thank heavens for the admin person on the phone who helped me find the auditorium.