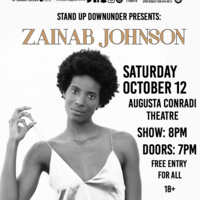 ///STANDUP DOWNUNDER PRESENTS: ZAINAB JOHNSON///
Zainab Johnson is a stand-up comedian, actress and writer, who was recently selected to be one of Variety’s Top 10 Comics To Watch 2019. Zainab’s comedy is based on her unique point-of-view, which was shaped growing up in Harlem as one of thirteen siblings in a Muslim family. After getting a degree in math and taking a job as a teacher, she quickly learned that she had a different calling. Zainab can most recently be seen in her appearance on Epix’s Unprotected Sets and has made appearances on Late Night with Seth Meyers, BET's Comic View, MTV's Acting Out, and The Melbourne Comedy Festival. Zainab can next be seen as the series-regular role of Aleesha on the Greg Daniels Amazon series UPLOAD.