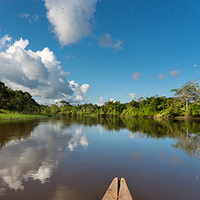 Join the Florida State University Department of Modern Languages and Linguistics for Amazonia Week 2022, which brings together the perspectives of indigenous cultures, humanists, Amazonian community leaders, modern Amazonian artists, and scientists to provide insight to meet our current sustainability challenges and address the survival of all species. Listening to inspiring Amazonian cosmovisions can help us understand the complexities of our multicultural and multi-natural worlds.

All events are free and open to the public and a detailed schedule is available below. Sessions are presented in English unless otherwise noted. For more information, contact Diego Mejía Prado at dmejiaprado@fsu.edu.

2:40 p.m.
Virtual Round Table and Discussion
“Representations of the Rainforest: Student Perspectives on the Amazon”

4:30-5:30 p.m.
Panelist Presentations and Discussion
“Writing the Amazon: Student Perspective on the Amazon”
FSU’s Alice Lopez (“Re-writings Amazonian Storytelling”) and Isabella Damasceno (“The Dolphin Legend and Violence against Women in the Amazon”) discuss their work in context.

Following the presentations, Pulecio and Abt will discuss the critical importance of the Amazon rainforest for life on Earth, and the impacts that the rapid destruction of ecosystems have on the Indigenous and riverine people who depend on the river to sustain their communities, as well as the environmental and social justice activities that are underway on their behalf.

Chanelle Dupuis, of Brown University, presents “The Smell of Water: A Liquid Witness to Environmental Change in Amazonia"

Following the presentations, Uzendoski and Rocha will discuss the value of Indigenous oral histories and stories in the context of a globalized world.

Jorge Reinel Pulecio Yate is a Colombian economist, peace advocate and writer born in the Colombian Amazon. After obtaining his degree in economics from Universidad Nacional de Colombia and degrees from University of Campinas – Brazil and University of Andalucía – Spain, Pulecio worked as professor of economy at Universidad Nacional de Colombia for over two decades, publishing many articles concerning international economy. Among his many political and administrative positions, he served as an economy analyst for the the United States-Colombia Trade Promotion Agreement (CTPA) until 2007, and as a secretary for the office of development for the mayor of Bogotá in 2012. Growing up in the rural areas of the Caquetá River region of Amazonia, in the early years of his political career he participated in the peasant and union movements during the ’70s and ’80s.

Claire Beveridge is a postdoctoral associate in the Tropical Rivers Lab at Florida International University in Miami. At FIU, she is part of an interdisciplinary team of scientists that is partnering with action-oriented institutions to advance Amazon Basin freshwater ecosystem conservation. Beveridge’s background is in hydrology and civil engineering and her research interests are in water resources management, stakeholder engagement, and capacity building. She is an editor of the new Community Science journal and its knowledge exchange platform. She received her Ph.D. from the University of Washington in 2020.

Elizabeth Anderson is a freshwater conservation ecologist based at Florida International University in Miami, where she is assistant professor in the Department of Earth & Environment. Her work has a strong conservation focus and involves collaborations with other scientists and those in key water resource management roles. Anderson’s research has been supported by the MacArthur Foundation, the Tinker Foundation, the U.S. Agency for International Development, and National Geographic. She received both undergraduate and Ph.D. (Ecology) degrees from the Odum School of Ecology at the University of Georgia, in Athens, Ga.

Chanelle Dupuis is a second-year Ph.D. student in the Department of French and Francophone Studies at Brown University. She is interested in perception and the senses and specifically works in the field of smell studies, writing about smells and their representation in 20th century French and Francophone literature. Her current research is on the link between smell and trauma and considers the presence of “violent smells” in texts written during World War II. She is also interested in the Amazon and has worked on analyzing folktales from the Amazon and understanding how smells can be indicators of pollution and environmental change in the region. Dupuis earned her undergraduate degree at FSU.

Michael Uzendoski holds a Ph.D. in anthropology from the University of Virginia and is a specialist in cultural anthropology, symbolic anthropology, ethnopoetics, storytelling/folklore, and ritual, and he has extensive academic and field experience in Amazonia. Uzendoski currently works at the Department of Anthropology, History, and Humanities at the Facultad Latinoamericana de Ciencias Sociales, Sede Ecuador (FLACSO ECUADOR and does research in the areas of sociocultural anthropology and world literatures. One of his current projects is “Kukama Runa: Polyphonic Aesthetics in Cine Comunitario among the Napo Runa of Amazonian Ecuador (with Patricia Bermúdez).”

Colombian Miguel Rocha-Vivas, holds a Ph.D. in Languages and Literatures, and is a writer, intercultural educator, and author of many essays and narrative books. He is also the co-founder of the Intercultural Creation Network. Currently, Rocha-Vivas is an associate professor and researcher at the Universidad Javeriana, Bogotá, where he also serves as is director of the Center of Ecocriticism and Intercultural Studies. In 2009, he won the National Prize for Research in Literature, and in 2012 the Indigenous Parliament of America recognized him for his collaborative work with Indigenous peoples. With “Mingas de la palabra,” a book about Colombian Indigenous contemporary writing, he won Casa de las Américas Award in Cuba in 2016. His most recent books are: “Arca e Ira, Conversations in Times of Dehumanization” (Mexico, Universidad de Guadalajara, 2019) and “Word Mingas” (University of North Carolina Press, 2021). Rocha-Vivas’ texts have been translated into Korean, Japanese, English and French.

Jeremy Larochelle is a professor of Spanish at the University of Mary Washington in Fredericksburg, Va., where he teaches courses in Latin American literature and ecology. He has published articles in Hispania, Review: Literature and Arts of the Americas, The Dirty Goat, and several chapters in edited volumes on Latin American literature and environmental issues. His research on the Amazon culminated in his publication of “More Applause for the Rain: Anthology of Recent Amazonian Poetry” (Tierra Nueva, 2014) a critical anthology of recent Amazonian poetry from across the Amazon Basin.

Diego Mejía Prado has a Ph.D. in Latin-American literature and cultural studies from Florida State University. Broadly, his research interests intersect topics both from the natural sciences and humanities, like environmental issues, history, ecocriticism, and the relationship between nature and culture, specifically in riverine and indigenous communities in Amazonia. For his Ph.D. research, Mejía studied new strategies of environmental protection and exploitation in natural resources dependent communities in the Peruvian Amazon.