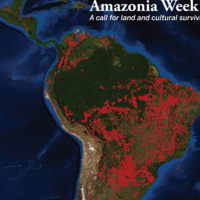 Amazonia Week: A call for land and cultural survival

In the midst of life on this perilously fragile Earth, we have a pressing need to educate ourselves about the lands and peoples of Amazonia, an endangered region that plays a pivotal role in the life of humankind and the entire planet.

The Amazon extends across nine countries, includes over 300 indigenous languages and cultures as well as four European languages, and encompasses 40 percent of South America. It is the site of historic and continued conflict, as well as being the largest and most biodiverse rainforest in the world.

Join the College of Arts and Sciences and the Department of Modern Languages and Linguistics in welcoming experts from around the world for an interdisciplinary summit on crucial issues in this area. Events are free and open to the public.

Panel: A Threatened Environment and Strategies for the survival of Amazonia

Panel: Culture and Environmental Crisis in the Amazon

Jorge Bodanzky, born in 1942 in São Paulo, Brazil, is a filmmaker, writer and photographer. Bodanzky is most known for his films, some of which include “Iracema – Uma Transa Amazônica” (1975), “The Mucker” (1978) and “Drittes Jahrtausend” (1982). He attended the University of Brasilia in Brazil, and went on to study cinematography in Germany. In his career as a photojournalist, many of his films have focused on the boundary between documentary and fiction, and Bodanzky has since won multiple awards from film and documentary film festivals. He has worked alongside internationally recognized producers such as Orlando Senna and Alexander Kluge, among others.

Will Boose is a second-year graduate student at the University of Florida’s Master in Latin American Studies program, where he conducts ethnographic research on the labor experiences of motocarristas, or motorcycle taxi drivers, in Iquitos, Perú. He explores themes such as road conditions, societal tensions, collective organizing, gender and creative expression. His broader academic interests include infrastructure, urban Amazonía, informal transportation and multimodal methods. Boose is also a poet, and collaborates with colleagues in Iquitos as the digital director of the poetry and literature review “SENTIDOS: Revista Amazónica.”

Marcos Colón received his Ph.D. in Spanish and Portuguese Cultural Studies from the University of Wisconsin-Madison in 2019. His research focuses on Brazilian literary and cultural studies, with particular emphasis on representations of the Amazon in 20th- and 21st-century Brazilian literature and film. He is currently working on a book project based on his experiences filming the Amazon. Colón has produced and directed two documentary films representing diverse perspectives on humanity’s complex relations with the natural world: “Beyond Fordlândia: An Environmental Account of Henry Ford’s Adventure in the Amazon,” (2018) and “Zo’é,” (2018) based on his experiences with the Zo’é tribe, an Amazonian indigenous community that has had little contact with the outside world. He is particularly interested in examining perspectives on the post-rubber era in the Amazon. Colón’s scholarship uses the post-rubber era as a springboard for re-envisioning the region in a “relational” way, challenging hegemonic representations of the tropics in literature and culture. He is the creator and editor of Amazonia Latitude, a digital environmental magazine.

Chanelle Dupuis is a senior at Florida State University where she studies Spanish and French with minors in Portuguese and German. She is interested in literature, endangered languages and bodily senses, specifically olfaction. Dupuis has published an article in the magazine Amazonia Latitude titled, “To Speak is to Exist: The Case of Endangered Languages in Brazil and Ecuador.”

Juanjo Fernández, a professional photographer from Santiago de Compostela, Spain, has spent more than three decades working for the press, as well as in corporate communication, architecture photography and interior design, and has developed many personal photography projects. Fernández has lived in Lima, Peru since 2014 and worked with international media outlets such as El País from Spain.

Evan Kelsch is a marketing major and Spanish minor at Florida State University. Through his position as director of marketing for Innerlight Surf Shops, he created a collaborative event known as Clean the Sabine, which in its first event, cleaned over 350 pounds of trash from Florida’s intercoastal waterways. Kelsch is currently expanding his environmental marketing efforts through field research in the Peruvian Amazon, starting from a local scope.

Valeria Meiller is an Argentine writer and translator pursuing her Ph.D. in Spanish and Portuguese at Georgetown University. Her broader research interests include the environmental humanities, Latin American poetry, translation theories and practices and critical theory. Meiller has had articles published in the academic journals Lógoi and Tabula Rasa and is the author of the Spanish poetry books “El Recreo,” “Prueba de Soledad en el Paisaje” (co-author), “El Mes Raro,” and the forthcoming “El Libro de los Caballitos.” She has also translated the work of Dorothea Lasky, Tao Lin, Noah Cicero, Megan Boyle and David Toop from English to Spanish, and “A Year in Heaven” (co-translation) from Spanish to English.

Diego Mejía Prado is a Ph.D. student in Spanish literature and cultural studies at Florida State University and a biologist from Universidad Javeriana in Colombia. His research interests intersect topics from both the natural sciences and humanities, including environmental issues, justice, history, ecocriticism, and the relationship between nature and culture, specifically in riverine and indigenous communities in Amazonia. Prado is currently studying new strategies of environmental protection and exploitation, as well as other environmental problems in the Peruvian Amazon in relation to their different representations in literature, science, oral narratives and global markets. He has published two books on biological and cultural topics related to plants, and numerous articles dealing with environmental issues in Colombia.

Herman Vladimir Ruiz Abecasís is a Peruvian biologist born in Loreto, a region of the Peruvian Amazon. He has extensive experience in the evaluation of biological diversity and practice in the management of natural areas protected by the government in the Peruvian Amazon. As an environmental specialist, Abecasís has worked in the development of scientific reports and environmental impact assessments related to oil drilling in the Amazon basin. He has also served as head of the Pacaya-Samiria National Reserve in the Amazon basin, managing human resources. Abecasís is currently the director of the Allpahuayo Mishana National Reserve.

Adela Caridad Ruiz Arce is a biologist from the Peruvian Amazon specializing in ecology and conservation, with expertise in the areas of feeding and breeding of Arahuana fish for human consumption in the area of Loreto, Peru. She currently works as a fisheries expert on the Cite Productive Maynas, where she directs workshops and gives technical assistance to independent fishermen, processing fish business and small fisheries in the province of Maynas, Loreto.

Patrícia Vieira is an associate research professor at the Centre for Social Studies at the University of Coimbra in Portugal and an associate professor of Spanish and Portuguese at Georgetown University. Her fields of expertise are Latin American and Iberian literature and cinema, utopian studies and the environmental humanities. Her most recent book is “States of Grace: Utopia in Brazilian Culture” (SUNY UP, 2018). She is currently working on a project on Amazonian literature and cinema and is co-editing a book titled, “The Mind of Plants.”