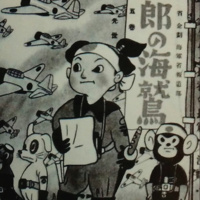 Attack of the Peach Boy: The Politics of War in a Japanese Folktale In modern times, the ending of the Japanese folktale Momotarō, or The Peach Boy, has undergone many changes. The original tale ends with Momotarō giving the treasure he plundered from “Island of the Ogres” (Onigashima) to his mother and father. But in later versions, Momotarō returns the treasure to its original owners, the village people. Such an ending may appear as a depiction of benevolence, but closer examination will reveal its hidden political nuances.

This lecture examines the history of the tale Momotarō and argues that its endings have been changed to suit political agendas at key points in modern Japanese history, especially during times of war. The talk traces the tale’s transformation from its recorded origins in the Edo period (1603-1867) to its modern versions before World War II and in contemporary popular culture.

Dr. Motoi Katsumata is Professor of Japanese Literature and Cultural Studies at Meisei University (Tokyo, Japan). He is currently a Madeleine Haas Russell Visiting Professor in the East Asian Studies Program, and the Department of German, Russian and Asian Languages and Literature at Brandeis University. Dr. Katsumata has authored books about folklore, Confucianism, and book history in early modern Japan.

Colleges, College of Arts and Sciences, Modern Languages and Linguistics