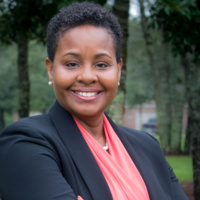 Plus, free lunch provided by Chartwell's.

Colonel Donna Pilson, USAF, Retired
Colonel (R) Donna Pilson entered the Air Force in 1993 from Air Force ROTC at Tuskegee University. While she is a career Acquisitions Program Manager and Engineer, she has served in various capacities throughout her 25-year military career. Post-graduation, she was assigned to the University of Virginia as a “Gold Bar” recruiter for minority applicants to the AFROTC scholarship program.  She then served as Project Manager for C-17 maintenance training, landing gear and hydraulics systems in Dayton, OH.  She later transitioned to Cape Canaveral Air Station where she was responsible for upgrade projects for the Titan IV launch program.  In 1996, Colonel Pilson transitioned to Langley AFB, VA where she worked several positions, including F-15 Technical Requirements Engineer.  She then served as an Executive Assistant for the Assistant Vice Chief of Staff of the Air Force, and in 2006, deployed to Bagram, Afghanistan as an Executive Officer.  In 2007, she was selected as Commander, Defense Contract Management Agency (DCMA)-Irvine, responsible for providing tailored on-site engineering, quality & business expertise for 250 contractors on DoD and NASA contracts valued at $2.4B.  She then moved to Tyndall AFB, FL where she served as Commander of the Tyndall Research Laboratory.  In September 2018, Colonel Pilson retired after having served as the Support Equipment and Vehicles Division Chief at Robins AFB, GA.  There, she was the single point manager for over 24,000 equipment items and 87,000 vehicles, executing more than $1B a year.

Colonel Pilson holds a Bachelor of Science in Aerospace Engineering from Tuskegee University, a Masters in Aeronautical Sciences from Embry Riddle Aeronautical University, and a Masters in Military Sciences from the Marine Corps University.  She completed the Marine Corps Command and Staff College, and the Air Force’s Air War College.  She holds government certifications in Program Management, Executive-level Program Management, Engineering, Test & Evaluation, and Contracting.

In addition to a stellar military career, Colonel Pilson has also answered God’s call on her life.  Throughout her career, she has been an active member of her local church, and has served in several leadership positions including Youth Leader, Girls Ministry Coordinator, Trustee, Church Administrator, and Director of Operations.  She has spoken on numerous occasions in various capacities, and has served as women’s conference facilitator.

Despite her numerous accomplishments and experiences, Colonel Pilson is most proud of her family.  She is married to Lennis Coy Pilson, III and they have two children, Corey and Kiana, who currently attend college at Duke University and the University of Virginia, respectively.