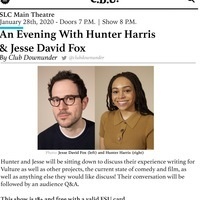 // CDU PRESENTS: AN EVENING WITH HUNTER HARRIS AND JESSE DAVID FOX //
Hunter and Jesse will be sitting down to discuss their experience writing for Vulture magazine as well as their work on other projects. They will also comment on the current state of comedy and film, and anything else they would like discuss! This will be followed by an audience Q&A.

JESSE DAVID FOX is a writer/ journalist living in Brooklyn, New York. He has worked at Vulture since 2012, first as an Associate Editor and currently as Senior Editor focusing on comedy. There, he has interviewed comedians including Jerry Seinfeld, Seth Meyers, Sarah Silverman, Stephen Colbert, and John Mulaney, both at live events and for Vulture.

Launching in early 2017, Fox is also the host and creator of Good One, a podcast about jokes and the comedians who tell them. Guests have included Weird Al Yankovic, Jim Gaffigan, Kristen Schaal, Bill Burr, and Tig Notaro. With hundreds of thousand total downloads in its first season, it peaked in the top 5 on the iTunes comedy podcast charts and 35 on the overall charts.

Fox’s work has also appeared in New York Magazine, Slate, Splitsider, The New Republic, The Week, and The Awl. Outside of journalism, Fox has had jokes appears on Fox’s Bob’s Burgers and two short plays produced.

****
HUNTER HARRIS is a staff writer at Vulture, New York magazine’s entertainment and culture news site, where she writes about movies, covering everything from Hollywood’s #metoo reckoning to awards season, and more. She joined the site in 2016 as an associate editor. She was included in Paper Magazine’s “100 People Taking Over 2019” as a name to watch, and has appeared on NBC’s “Today,” Good Morning America, PBS NewsHour, BBC World News, and many more. Previously, she was the entertainment editorial assistant at Refinery29 where she covered music, movies, and TV.