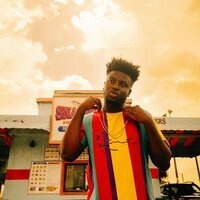 //SYLVAN LACUE//
Miami rapper Sylvan LaCue, formerly known as Quest, has been steadily building a loyal fan-base over the years with unparalleled skills on the mic, a forward-thinking sound, and a humble perspective. LaCue left his first major mark on the music industry with his Searching Sylvan mixtape in the fall of 2014. The project was widely regarded as one of the best narratives to be told in rap that year, receiving praise from HotNewHipHop, Huffington Post, Complex, XXL and more. SS touched on everything from Lacue’s financial struggles and family battles to the rap game and the start of a new love -- cementing the rapper as one of rap's most poignant storytellers to watch.

At the end of 2014, LaCue shed his original ‘Quest’ artist name, going with his real name and launching his Wise Up collective. The emcee went on to release his critically acclaimed album Far From Familiar in April of 2016, the official follow-up LP to his Searching Sylvan mixtape. As The Fader noted, Far From Familiar proved to be “heavily layered, introspective, and totally engrossing”, catapulting LaCue into the next level of his career. Following so, LaCue has recently released his sophomore album "Apologies in Advance", now continues to carve out his own lane with honest music about human nature, finding his purpose, and being open in his lyrics about the 'not so perfect' parts of life.

//KHARY//
"Cutting his teeth at open-mics in his hometown of Providence, Rhode Island, Khary found his voice as an artist when he started interning at various music and media companies in NYC. In 2016, Khary dropped Intern Aquarium, his debut project, which focused on his hustle and his nascent artistic being, finding viral success with “Find Me,” which recently placed on the soundtrack of NBA 2K18. Earlier this year, Khary released Tidal Graves, an EP created in collaboration with producer Lege Kale. With over 17 million plays on all platforms, Khary is an artist on the rise growing a considerable fanbase and performing with the likes of Tory Lanez, Kyle, Mura Masa, Talib Kweli, Royce Da 5’9”, Waka Flocka, and comedian Jermaine Fowler.

In April of 2018 Khary released 'Captain', a confident and focused new project, emphasizing the necessity of self-knowledge and self-mastery for success in music or any other artistic pursuit."