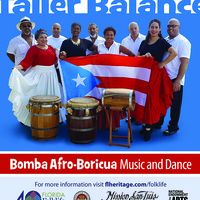 As part of the 2019 Folklife Artist-in-Residence Program, the Florida Folklife Program and the Florida State University Center for Music of the Americas will present Taller Balancé Bomba Afro-Boricua in a workshop and lecture in the Westcott Building in room 060 (located near Ruby Diamond Concert Hall on the corner of University Way and Convocation Way) from 5 to 6 p.m. on Wednesday, September 18, 2019. This event is free and open to the public.

About the Artists
Angel Reyes Romero is a distinguished performing artist, considered one of the most exceptional masters and educators of bomba music and dance. Born in Rio Piedras, Puerto Rico and raised in New York, Reyes started his music career at an early age on drum set and latin percussions in his own pop rock group. He later joined pioneer bomba group Teatro Otra Cosa under the direction of Felix Romero, taking part in the first ever ground breaking bomba sinfónica, featuring the folk drumming of bomba and Western classical music in New York in 1975. Reyes apprenticed with Puerto Rican bomba patriarch Don Rafael Cepeda where he trained meticulously on the barriles, or bomba barrel drums, and dance techniques. He performed and toured as a principle member of La Familia Cepeda, Los Hermanos Ayala, and Paracumbé, the three most important groups representing the regional styles of bomba.

In 1981, Reyes founded Agueybaná, developing community and after school performing arts programs for youth. In 2002, he participated in “ReEncuentro de Pies, Tambores y Faldas,” a display of flamenco, bomba and kathak (classical Indian dance) in which he and his son Otoqui assumed the roles of choreographers, singers, and drummers. Later, the show won the “Premio ACE” and “HOLA” awards for Best Musical Production.

In Chicago in 2008, Reyes was recognized by the Segundo Ruiz Belvis Cultural Center for his dedication and contribution to bomba. He received an M.A. from Goddard College in 2011 in Caribbean cultural studies in education, and serves as a board member for the Center for Linguistic and Cultural Democracy, a non-profit cultural center, dedicated to supporting children, youth, and adults in realizing their potential.

About the Tradition
Bomba is a social and communal traditional dance and musical style of Puerto Rico characterized by an improvised dialogue between an individual dancer and the primary drummer. Consistent with the three main cultural influences that make up Puerto Rican identity, bomba emerged from West African, Taíno, and Spanish cultural roots. The central components include percussion, song, and dance; these combined cultural expressions were conducted in plantation communities across the island. Born out of the sugarcane plantation history of Puerto Rico, bomba developed among field laborers and enslaved people of African and Indigenous descent. Although initially many more rhythms were used, the primary four that have been preserved include sicá, cüembé, yubá, and holandés. Bomba is most commonly attributed to Puerto Rico’s coastal regions of Mayagüez, Ponce, Santurce, Loiza, Guayáma, Arroyo, and Cataño.