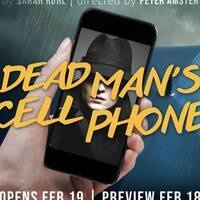 It's life on the line. In a quiet cafe an unsuspecting young woman, irked by an insistently ringing cell phone, discovers that its owner is, in fact, dead. In an impulsive move, she decides to answer the call and her fateful act plummets her deeply into the dead man's mysterious life. Reveling in the intrigue, she attends his funeral, meets his eccentric family and embarks on a wild film-noir odyssey. Dead Man's Cell Phone is a comic meditation on morality, redemption, and connecting in a technologically obsessed world.