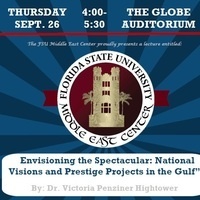 Envisioning the Spectacular: National Visions and Prestige Projects in the Gulf