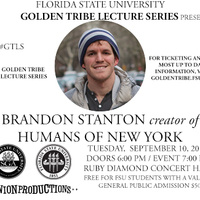 As the founder of the street portrait blog, Humans of New York, Brandon Stanton has emerged as a worldwide Internet phenomenon and one of today’s most influential storytellers. Join the Golden Tribe Lecture Series on September 10, 2019, as he candidly shares his own personal story, and the perspective he has gained since embarking on his journey to help others tell theirs.