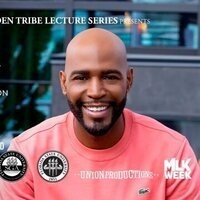 // AN EVENING WITH KARAMO BROWN //
The Golden Tribe Lecture Series is proud to announce Karamo Brown as the keynote speaker for the 32nd annual MLK Week Celebration! A graduate of Florida A&M University, Karamo worked as a licensed social worker for over a decade before transitioning into media. Beginning his television career in 2004 as a housemate on the MTV hit reality series The Real World, Brown was the first openly-gay African- American in the history of reality television. With Queer Eye, Karamo has won three Emmys, including for Outstanding Structured Reality Program, and a Television Critics Association award.