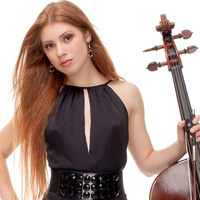 The FSU College of Music is pleased to welcome cellist Cicely Parnas. Ms Parnas will deliver a masterclass to FSU students on Friday, January 18, 2019 at 3:00 p.m. in Lindsay Recital Hall.

Ms. Parnas has appeared at the Alys Stephens Performing Arts Center, the Buffalo Chamber Music Society, Vanguard Concerts, the Jewish Community Alliance, and the Washington Center for the Performing Arts, and has performed with the Long Bay Symphony, the Longwood Symphony Orchestra, the Rochester Chamber Orchestra, and the Montreal Chamber Orchestra, where she gave the world premiere of Jim McGrath’s Concertino for Cello.

Ms. Parnas made her Carnegie Hall concerto debut in 2012, performing the Saint-Saëns Concerto with the New York String Orchestra under the baton of Jaime Laredo. The New York Times raved: “Cicely Parnas, a fast-rising young cellist, was the impressive soloist in a rhapsodic performance.” She has performed the Elgar Concerto with the Vermont Symphony, once again with Jaime Laredo and toured France performing the Saint-Saëns Concerto with L’Orchestre National des Pays de la Loire. Other international appearances include her participation in the 2013 Young Concert Artists Festivals in Tokyo and Beijing.

Ms. Parnas, no stranger to the limelight, was named an inaugural Young Artist in Residence on NPR’s Performance Today in 2011, where she was featured in five broadcasts and an American Public Media video spotlight. Winner of the 2012 Young Concert Artists International Auditions, she was presented last season in debuts at Merkin Concert Hall and the Kennedy Center to rave reviews. She holds the Anne and George Popkin Cello Chair of YCA and was the recipient of YCA’s Mortimer Levitt Career Development Award for Women Artists in 2012. She also captured First Prize in the 2011 Cello Concerto Competition at the Indiana University Jacobs School of Music.

Granddaughter of the distinguished cellist Leslie Parnas, Cicely Parnas started playing the cello at the age of four and made her concerto debut at eleven with the Woodstock Chamber Orchestra. She has studied with cellists Peter Wiley and Ronald Feldman, and earned an Artist Diploma from the Indiana University Jacobs School of Music, where she worked with Sharon Robinson. Ms. Parnas performs on a 1712 Giovanni Grancino cello