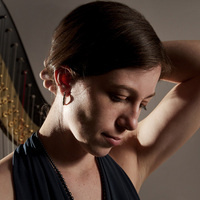 The FSU College of Music is pleased to welcome harpist Jacqueline Pollauf to Dohnányi Recital Hall on Friday, March 31, 2017. The recital will begin at 2:30 p.m. and will feature works for solo harp by composers including Paul Hindemith, Marcel Tournier, Cyril Scott, Johann Sebastian Bach, and more. Admission to this event is free and open to the public.

Jacqueline Pollauf, harpist, praised for playing with “transcendent ability” (The Sybaritic Singer) and a “steady and most satisfying elegance” (The Toledo Blade) made her solo debut at the age of sixteen with the Perrysburg Symphony Orchestra, and has since performed at Carnegie Hall and at the Eleventh World Harp Congress in Vancouver, Canada. Audiences are delighted by the variety of sounds found in Jacqueline’s sensitive playing.

Recording credits include Music from Three Continents with the Scottish Voices ensemble of Glasgow, Scotland; a solo recording, Bouquet; and an upcoming 2017 release with Trio Sirènes. Jacqueline has been honored with awards from the Maryland State Arts Council and Chamber Music America. In addition to being the director of the Baltimore Harp Camp, Jacqueline is on faculty of American University, the Baltimore School for the Arts, Blue Lake Fine Arts Camp, and the University of Maryland, Baltimore County. She holds degrees from the Peabody Conservatory.

Free and open to the public