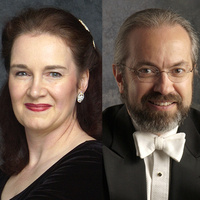 The FSU College of Music is pleased to present a Guest Artist Recital featuring the Adkins/Newman Duo (violin and piano) on Monday, January 27, 2020 at 7:30 p.m. in Longmire Recital Hall. Works for the evening include a selection of modern and classical compositions including Beethoven’s Sonata for Piano and Violin in D Major, Miklós Rózsa’s Duo for violin and piano, and more. This performance is free and open to the public.

For over 20 years, the Adkins/Newman Duo has thrilled American audiences. The beloved duo combines the talents of two extraordinary artists: violinist Elisabeth Adkins, former Associate Concertmaster of the National Symphony, and Edward Newman, prizewinning solo pianist and chamber musician. The couple met as members of the American Chamber Players, and they have played together in virtually every one of the United States. Their concerts are characterized by musical elegance and charm, grace and passion, deeply-moving performances that touch seasoned concertgoers as well as those new to chamber music.

After 31 years as Associate Concertmaster of the National Symphony in Washington, D.C., Elisabeth Adkins was invited to join the faculty of Texas Christian University in the fall of 2014. She serves as Professor of Violin at TCU, and continues her orchestral career as the Concertmaster of the Corpus Christi Symphony Orchestra, the Richardson Symphony and the Plano Symphony. She has appeared as concerto soloist for the Baltimore Symphony, the Dallas Symphony, and the Seattle Symphony, as well as numerous appearances with the National Symphony. As the solo violinist of the 20th Century Consort, Ms. Adkins has been a noted interpreter of the contemporary repertoire; she also has served as concertmaster of the Smithsonian Chamber Orchestra. She performs in recital with her husband, pianist Edward Newman; the duo has presented concerts at the Kennedy Center and the National Gallery, and was featured as the inaugural program of public radio’s Front Row Washington.

Edward Newman received both his Bachelor's and Master's degrees from the Juilliard School, and he has been a prizewinner in many major competitions, including the Robert Casadesus (Grand Prize, 1979), Gina Bachauer, and University of Maryland International Competitions. Mr. Newman has been featured soloist with the Cleveland Orchestra, the National Symphony Orchestra, the Baltimore Symphony, the Utah Symphony, and the Boston Pops, and with a number of European orchestras. As pianist of the American Chamber Players for 10 years, he appeared in concert throughout the United States. He also performs frequently in recital with his wife, violinist Elisabeth Adkins, and as pianist with the Adkins String Ensemble. He has served on the faculties of The Catholic University of America, George Mason University, the Levine School of Music, and the Washington Conservatory; he maintains a private teaching studio in Fort Worth, Texas.