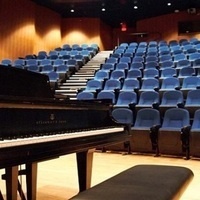 The FSU College of Music is pleased to welcome jazz percussionist Jason Marsalis to Dohnányi Recital Hall on Tuesday, September 11, 2018 at 7:30 p.m.

Jason Marsalis’ career started when he was a teenager.  He not only performed with jazz legends Joe Henderson and Lionel Hampton, he appeared on the PBS television show “Mister Rogers Neighborhood” at age 13.  His recording debut was a year later on Delfeayo Marsalis’ album Pontius Pilate’s Decision.  A native of New Orleans, his skills were developed working with a diverse cross section of bands from Casa Samba (Brazilian), Neslort (jazz fusion) Summer Stages (children’s theater), Dr. Michael White (traditional jazz), Dave Badie (smooth jazz) and many others.  It was in 1998 that he co-founded the Latin-jazz group Los Hombres Calientes and recorded two albums with the group.  Marsalis has sense produced 6 albums under his own name while producing reissues and current recordings of his father on their self-owned label, ELM Records.  Marsalis has also made his mark with pianist Marcus Roberts by recording 13 albums and also doing a world premiere of an arrangement of George Gershwin’s Concerto in F for jazz trio and orchestra.  Lately, he has performed with the Jazz at Lincoln Center Orchestra performing works of Wynton Marsalis, Ornette Coleman and Leonard Bernstein while serving as an educator for their Essentially Ellington big band competition.

Free and open to the public