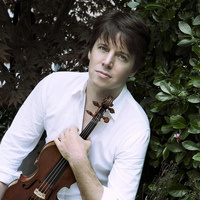 With a career spanning more than 30 years as a soloist, chamber musician, recording artist, conductor, and music education advocate, Joshua Bell is one of the most celebrated violinists today.  A Sony Classical artist, Bell has recorded more than 40 albums garnering Grammy, Mercury, Gramophone, and Echo Klassik awards. Named the Music Director of the Academy of St Martin in the Fields in 2011, he is the only person to hold this post since Sir Neville Marriner formed the orchestra in 1958.

Fall 2018 performances include the season-openings of the National Symphony Orchestra with Gianandrea Noseda and Cincinnati Symphony with Louis Langrée, performances with the Hong Kong Philharmonic under Jaap van Zweden, Baltimore Symphony with Cristian Măcelaru, Deutsches Symphonie-Orchester, Tonhalle Orchester Zürich, and Stockholm Philharmonic. A highlight is the live film concert with the New York Philharmonic of the Academy Award-winning film score for The Red Violin in commemoration of the film’s 20th anniversary.

In Spring 2019, Bell tours worldwide with the Academy and his North American and European recital tours with pianist Sam Haywood.