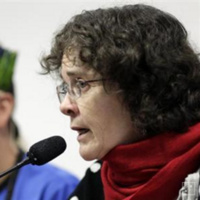 The FSU Center for Demography and Population Health in the College of Social Science and Public Policy and the Center for Global Engagement present a talk by Dr. Marta Azevedo, a Brazilian activist, anthropologist, and demographer who has worked with indigenous peoples in the Amazon for 30 years.

Illegal economic activities threaten indigenous territories and ecosystems in the Amazon. Dr. Marta Azevedo will discuss opportunities for alliances between traditional/indigenous​ groups and Brazilian and international allies to protect the region’s social and biological diversity.

Dr. Marta Azevedo served as President of Brazil’s Bureau of Indigenous Affairs (FUNAI) in 2012-2013, collaborated with the Rio Negro Indigenous Peoples Federation (FOIRN) for over 10 years, and served as an ally and partner in the first Indigenous Autonomous Demographic Census in 1994. As a Brazilian activist, anthropologist and demographer, Dr. Azevedo has worked with indigenous peoples in the Amazon for 30 years, striving to make the traditional Amazonian peoples and their organizations visible in Brazil’s National Congress, its universities, and in its official statistics.​

This event is open to the public. Join us for a reception with refreshments at 4:30 p.m. The talk will begin at 5 p.m.

A special thanks to the Brazillian Student Association for supporting this discussion.