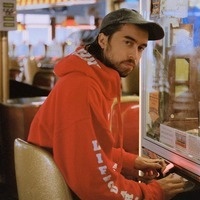 Club Downunder/Union Productions is proud to announce that FSU's Annual Last Call Before Fall concert will feature (Sandy) Alex G, Remo Drive, and Indigo De Souza! This festival-style concert takes place on FSU's Landis Green, is open to the public, and free for all ages. Every year Club Downunder/Union Productions hosts a concert on Langford Green to kick off the beginning of the fall semester. Join us on Saturday, August 24th at 7pm for this free show!

//SANDY ALEX G//
There’s hardly a second when Alex Giannascoli’s voice can’t be heard in “Walk Away,” the opener of his latest album, House of Sugar. On House of Sugar, his third full-length for Domino and ninth overall, Alex inhabits a diverse range of musical and emotional points-of-view (often simultaneously), in turn illuminating the tension that hides in the shadow of desire. The 26-year-old artist better known as (Sandy) Alex G—lingers throughout the album’s thirteen songs: between backwards and forwards, past and future, one voice and another.

Giannascoli began writing these songs in the fall of 2017, having just finished a tour for House of Sugar’s acclaimed predecessor, Rocket, and moved into a new apartment in Philadelphia. Whereas with earlier efforts, such as 2011’s self-released Winner or the landmark 2014 release DSU, he’d write numerous songs fairly quickly, with House of Sugar Giannascoli worked at a steadier pace, concentrating on fewer songs and laboring over each one more than before. Nothing is definitive, but after thirteen songs of being split apart and spread around, through these relationships, in the House of Sugar, he might finally be “put together again.”

//REMO DRIVE//
Since releasing their debut album, GREATEST HITS, in 2017 (later re-released in 2018 by Epitaph Records), brothers Erik and Stephen Paulson have been pegged as one of the most captivating acts in the new-era indie rock scene, mixing the musicality of bands like Weezer, Title Fight, and The Police with the idiosyncratic lyrical tendencies of the genre’s more modern movement. Greatest Hits, along with 2018’s POP MUSIC EP, took the band around the world with the likes of Saves The Day and Hippo Campus.

//INDIGO DE SOUZA//
Indigo De Souza is an Asheville based garage-pop band. Their dreamy sound packs a punch while maintaining a sense of heartbreaking intimacy. A cozy, yet brutally honest safe haven, laced in gut-wrenching heartbreak and the very best of love.

The energy at the concert was amazing! Even for people who don’t typically like this kind of music (like me), would 100% recommend going for the mosh pit alone