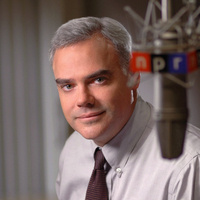 Making Sense of Washington, 140 Characters at a Time

Horsley will address the challenge of covering politics and economics in today’s polarized atmosphere, where there’s little agreement about objective facts and even basic government weather forecasts are subject to political manipulation.

As NPR's Chief Economics Correspondent, Scott Horsley reports on ups and downs in the national economy as well as fault lines between booming and busting communities.

Horsley turned to the economy after a decade on the White House beat, covering both the Trump and Obama administrations. Before that, he was a San Diego-based business reporter for NPR, covering fast food, gasoline prices, and the California electricity crunch of 2000.

He also reported from the Pentagon during the early phases of the wars in Iraq and Afghanistan.  Before joining NPR in 2001, Horsley worked for NPR member stations in San Diego and Tampa, as well as commercial radio stations in Boston and Concord, New Hampshire. He earned a bachelor's degree from Harvard University and an MBA from San Diego State University.