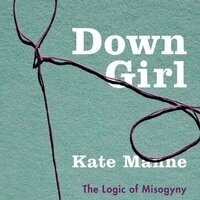 Description of Down Girl:

Down Girl is an exploration of misogyny in public life and politics. Kate Manne argues that misogyny should not be understood primarily in terms of the hatred or hostility some men feel toward all or most women. Rather, it's primarily about controlling, policing, punishing, and exiling the "bad" women who challenge male dominance. And it's compatible with rewarding "the good ones," and singling out other women to serve as warnings to those who are out of order. She applies her powerful theory to a wide range of public life but particularly politics.

Kate Manne is an assistant professor of philosophy at Cornell University, having previously been a junior fellow at the Harvard Society of Fellows from 2011-2013. She works in moral, social, and feminist philosophy. Her work has appeared in The New York Times, The Times Literary Supplement, The Chronicle of Higher Education, The Huffington Post, and The New Philosopher, as well as academic journals. Her lead essay for a forum on misogyny in The Boston Review was one of their '25 most-loved essays' for 2016. She has also been a winner of the American Philosophical Association (APA)'s annual op-ed contest.