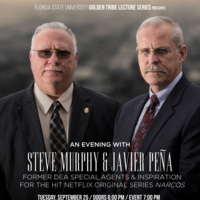 NARCOS: The True Story of Pablo Escobar with Steve Murphy and Javier Peña

Former DEA Special Agents & Inspiration for the Hit Netflix Original Series NARCOS Steve Murphy and Javier Peña take audiences to the edge of their seats as they recount their riveting pursuit of Pablo Escobar and deliver practical and oftentimes unorthodox advice on working together to achieve success despite challenges.

The American heroes responsible for the capture and downfall of infamous drug cartel leader Pablo Escobar, Steve and Javier were DEA special agents at the center of the largest, most complex, multi-national, high-profile investigation of its time. Their incredible journey pursuing the world’s first narco-terrorist following his brutal reign as head of the Medellin cartel in the 1980’s and early 1990’s is depicted in the Golden Globe-nominated Netflix series, NARCOS.

Now, these celebrated law enforcement officers take you deep into the history books as they reveal inside stories from a good-versus-evil battle that seems too wild to be true. Along the way, they share lessons they learned on effective leadership, teamwork and split-second decision making amid extreme circumstances.

With tactful humor and rarely seen visuals, Steve and Javier complement anecdotes about their experiences in hostile and oftentimes life-threatening conditions to leave audiences with a memorable and entertaining look at the real-life cartel drama. As a team, their admiration for one another’s efforts in their celebrated battle over evil is unmistakable and inspires you to recognize the possibilities created by working together.

Buy Tickets
This event content is powered by the Localist Community Event Platform.