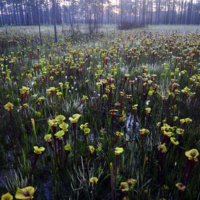 About the talk:
Seepage bogs and wet flats in the Florida panhandle are dominated by herbaceous vegetation and carnivorous plants. They contain some of the highest plant biodiversity in North America and possibly in the world. Unfortunately, 27 years ago it was estimated that 97% of all Gulf Coast pitcher plant bogs had already been destroyed or were severely altered. Having studied these carnivorous plant bogs for more than 45 years, Bruce Means has discovered that they are more diverse than we know.

About the speaker:
Dr. Bruce Means is an alumnus of Florida State University obtaining his Ph.D. in 1975. He founded the Coastal Plains Institute and Conservancy in 1984 and has served as its President and executive Director until the present. A field ecologist with 50 years’ experience, his main research interests are wide ranging, from ecosystems of the southeastern US to rare and endangered species. He has published 10 books and numerous articles that have appeared in National Geographic, BBC Wildlife, and many other natural history magazines. He co-produced and starred in various documentary films for National Geographic Explorer, BBC Television, and PBS. The foremost authority on the eastern diamondback rattlesnake, his 40-year exhaustive study of its biology entitled, DIAMONDS IN THE ROUGH, NATURAL HISTORY OF THE EASTERN DIAMONDBACK RATTLESNAKE, was just published. He is also a Courtesy Professor in the FSU Department of Biological Science.

NOTE: Refreshments are available prior to talk.