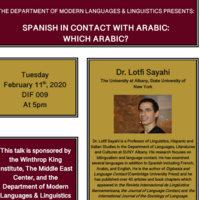 The Department of Modern Languages and Linguistics, the Winthrop-King Institute, and the Middle East Center invite you to attend a talk by Dr. Lotfi Syahi titled "SPANISH IN CONTACT WITH ARABIC: WHICH ARABIC?"

Dr. Lotfi Sayahi is a Professor of Linguistics, Hispanic and Italian Studies in the Department of Languages, Literatures and Cultures at SUNY Albany. His research focuses on bilingualism and language contact. He has examined several languages in addition to Spanish including French, Arabic, and English. He is the author of Diglossia and Language Contact (Cambridge University Press) and he
has published over 40 articles and book chapters which appeared in the Revista Internacional de Ling üística Iberoamericana , the Journal of Language Contact , and the International Journal of the Sociology of Language .