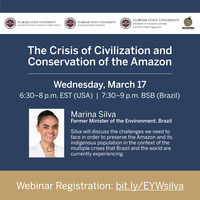 The Crisis of Civilization and Conservation of the Amazon

Silva will discuss the challenges we need to face in order to preserve the Amazon and its indigenous population in the context of the multiple crises that Brazil and the world are currently experiencing. Her reflections are the result of more than 30 years of socio-environmental activism in Brazil.

Marina Silva is an environmentalist, teacher, and politician. Silva competed as a candidate for the Brazilian Presidency in 2010, 2014, and 2018 after serving as Brazil’s Minister of the Environment from 2003 to 2008. As a politician, she was elected as the youngest federal senator in 1994, and founded her own Sustainability Network Party in 2013.

Silva has gained worldwide recognition for defending the environment, traditional communities, social justice, and sustainable development. She is the recipient of multiple awards including the Goldman Environmental Prize, WWF Duke of Edinburgh Medal, and the U.N. Champions of the Earth Award. Her work has been covered in the New York Times, the Financial Times, Foreign Policy’s Top Global Thinkers, the Guardian, and Harvard Law’s Women Inspiring Change Series.