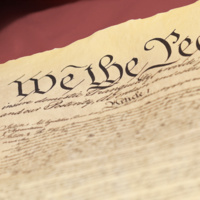 The U.S. Constitution and the Evolution of the Right to Vote.

Please join the FSU libraries for a talk to celebrate the ratification of the US Constitution on Constitution Day, Sept. 17 by Law Professor Michael Morley who will talk to us about "The U.S. Constitution and the Evolution of the Right to Vote."

Because of the United States' status as the world's most prominent democracy, it is surprising how limited the role of democracy actually was in the Constitution of 1789.  The Framers themselves were conflicted over the role "the People" should play in the new government they were crafting, and some of the theorists they drew upon cautioned against the perils of mob rule.  This talk will focus on the evolution of the right to vote under the U.S. Constitution, tracing its development from a primarily political issue for which political entities were primarily responsible, to a primarily constitutional concept which courts play a substantial role in defining.  It will contrast the roles of formal constitutional amendments with judicial reinterpretations of constitutional provision in the protection of voting rights, and analyze the various senses in which the term "constitutional right to vote" has come to be used.