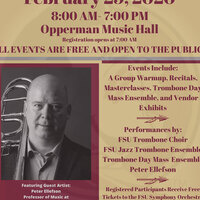 The Trombone Studio at the FSU College of Music invites you to join them for Trombone Day 2020:

ABOUT THE GUEST ARTIST

Trombonist Peter Ellefson grew up in southern Oregon and now holds the rank of Professor of Music at Indiana University’s Jacobs School of Music, where he is also Chair of the Brass Department. He has performed, recorded and toured internationally with the Chicago Symphony and the New York Philharmonic. He has also performed with the Boston, Cincinnati, Indianapolis, Milwaukee, National and Oregon Symphonies among many others. From 1992-2002, he was a member of the Seattle Symphony Orchestra and served as principal trombone for many cycles of Seattle Opera’s renowned productions of Richard Wagner’s Der Ring des Nibelungen. He has recorded music for over 100 motion picture, IMAX, TV, and video game soundtracks. Ellefson is a frequent recitalist and soloist. Composers Anthony Barfield, James Stephenson and Kevin Walczyk have written concertos for him. Chamber music credits include the Canadian Brass, Chicago Chamber Musicians, Chicago Symphony Orchestra Brass, Chicago Trombone Consort, Fulcrum Point New Music Project, New York Philharmonic Brass Quintet, Proteus 7, and the Trombones de Costa Rica. Ellefson has taught at Northwestern University, Roosevelt University, the University of Costa Rica and the Music Academy of the West. His solo CD, Pura Vida was released in 2010. More information can be found at www.peterellefson.com.