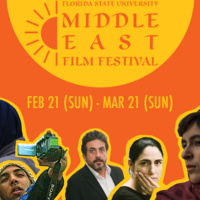 Join the Middle East Center (MEC) at FSU for the Virtual Middle East Film Festival Feb. 21 - March 21. Register one time for the event to receive links and sign-in information for each of the virtual screenings.
A brief description of each film is listed here:

Set during the Ethiopian civil war, a Jewish teenager hatches a scheme to keep her Christian boyfriend from being drafted, as she and her family prepare to flee the country and go to Israel to escape the war.

A road movie exploring a Moroccan perspective on the entwined relationship between Hollywood and the Arab/Islamic world. The film takes a human and humorous look at the effects Hollywood films have on people’s imagination.

An Israeli woman seeking to finalize a divorce from her estranged husband finds herself effectively put on trial by her country’s religious marriage laws. In Israel, there is neither civil marriage nor civil divorce; only Orthodox rabbis can legalize a union or its dissolution, which is only possible with the husband’s full consent.

Two Kurdish cleaning women living in Istanbul are caught between the richness and poverty of the city. One is trying to survive with her little daughter and the other dreams of buying a house in the district where they clean. The film offers an intimate look at the community that's in the epicenter of an ethnic conflict that dominates Turkish politics today.

The film is a dark coming-of-age tale of an Iranian teenage girl in Tehran. Based on her own adolescent experiences, Sadaf Foroughi's Ava introduces the codes and traditions the girls are up against in a strict, traditional society.

To attend, register at https://fsu.qualtrics.com/jfe/form/SV_5o3UZvDZaLszoAC