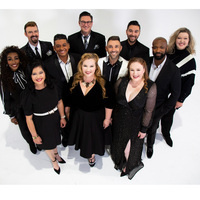 A cappella sensation Voctave has had over 150 million social media views of their videos, and their latest album, The Spirit of the Season, Deluxe Edition, reached No. 6 on the Billboard charts. Their previous album, The Corner of Broadway & Main Street Vol. 2, debuted at number 3 on the iTunes charts. Formed in 2015 by producer and arranger Jamey Ray, the voices that bring their arrangements to life represent a wealth of diverse backgrounds and musical experiences. Hailing from Central Florida, the eleven members of Voctave have performed across the globe and appear on countless recordings.