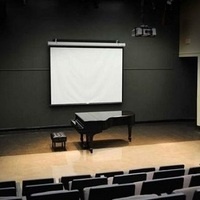 Lindsay Recital Hall, located in the Kuersteiner building, is named for Joe Lindsay, a retired businessman from Carabelle, Florida. His initial interest in music began as an adult when he started taking viola lessons with a member of the faculty. His support included many generous financial contributions to the College of Music, including a four-year scholarship awarded to an undergraduate string player. A choral rehearsal hall before it was renovated and named in 1989, Lindsay Hall is now used as a 100-seat lecture/recital space.

This was a chamber recital so a variety of instruments played on the four pieces with Nina on bassoon. Loved the Three Summer Sketches - dynamics & the blending of the violin/clarinet/bassoon was awesome AND it was such a cute piece. The Chabrier piece with Emilie O'Connor singing with a bassoon and piano was fascinating! Well done! In the Stafylakis piece we enjoyed the section where the cello and piano played against each other - very cool but the whole piece was fun to listen to as well as watch. The bassoon blended in perfectly. The Poulenc had so many choice musical moments - our favorite! The horn and clarinet played together/the horn and oboe played together/ the flute and oboe blended as one. We thought Noel Seaton on oboe was phenomenal. THIS was a highly professional group - every player was tops and Nina blended it all together for a terrific doctoral chamber recital. Thank you.